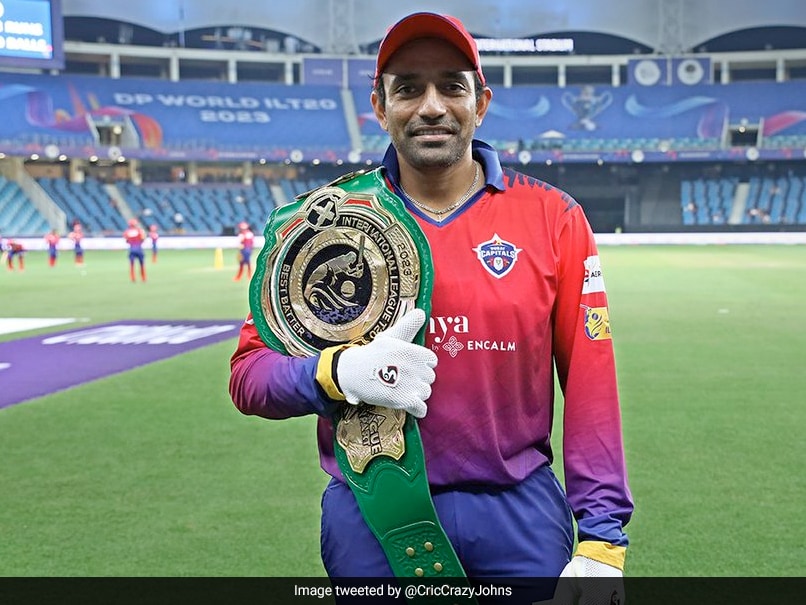 Former India and Karnataka batsman Robin Uthappa, who was part of the Indian team that won the 2007 T20 World Cup, announced his retirement from all forms of Indian cricket in September last year. The star is now pursuing his passion abroad and is currently playing in the ILT20, a franchise league in the UAE. Playing for Dubai Capitals, he became the first player to receive the green belt after his 46-ball 79 against the Gulf giants at the Dubai International Stadium on Monday. Uthappa currently tops the list of highest run scorers with 122 runs.

Interestingly, the green belt that Robin Uthappa received bore an uncanny resemblance to the belts that WWE wrestlers receive after winning championships. It was captivating the fans.

if @rabyuthappa Stone Cold Steve Austin of cricket, then which WWE legend will be the new winner of the green belt, @vincey14 stay?

Recently, Uthappa, who played his last two IPLs for CSK and decided to call it a day at the end of the 2022 season, said the trend of “constant changes” in the Indian team was making the players feel insecure.

“I think there is a lack of sense of security among the players in the team. There has been constant change in the team for a long time, when a player does not feel safe, he always has the mentality to save his place in the team,” he told news agency PTI.

Three-time IPL winner Uthappa said, “I think it is important to give the players a sense of security. What we are seeing is, a lot has changed over the last few years. And in important matches, their performance has gone down because they are sure about their place in (the) team for the next match. No.”

Citing the example of MI and CSK, two of the most successful IPL teams who have won five and four titles respectively, Uthappa added, “You look at the IPL, most of the time teams like this have won titles which have made fewer changes to the playing eleven. Chennai (Super Kings) And the success of Mumbai (Indians) also proves it.”

Wrestler’s allegation should be probed: Yogeshwar Dutta to NDTV