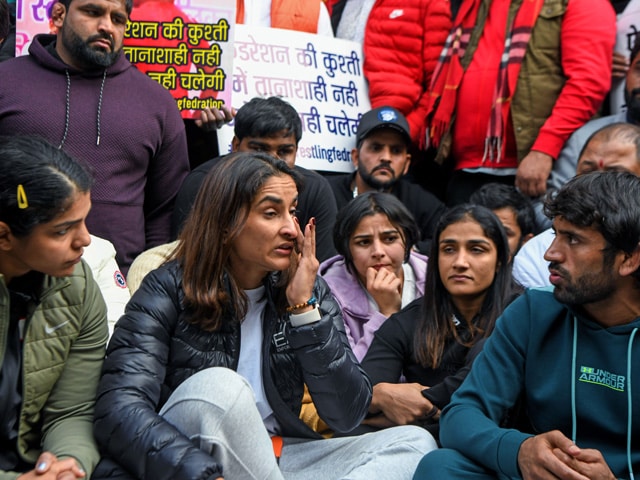 The Executive Committee meeting and Annual General Meeting (AGM) of the Wrestling Federation of India will be held on January 22 in Ayodhya, Uttar Pradesh. Federation president Brijbhushan Sharan Singh will also attend the meeting. On Thursday, text grapplers arrived at the Union Sports Ministry office at Shastri Bhavan for a meeting with officials amid a protest by wrestlers against the WFI and its chief Brijbhushan Sharan Singh.

“We are going to meet officials of the Union Sports Ministry and will inform the media about it after the meeting is over,” said wrestler Bajrang Punia amid the wrestlers’ protest against the WFI at Jantar Mantar.

Earlier in the day, champion wrestler and BJP leader Babita Phogat reached the protest site at Delhi’s Jantar Mantar where wrestlers continued their sit-in for the second day demanding action against the Wrestling Federation of India (WFI) chief and other officials. Several alleged sexual exploitation of athletes and “harassment of wrestlers through arbitrary rules and regulations of the WFI”.

“I have assured them that the government is with them. I will try so that their problems are resolved today,” Babita Phogat said after addressing the rally.

Babita who is a Deputy Director of Haryana Sports and Youth Affairs Department and a former wrestler had earlier tweeted, “I stand with all my fellow athletes on this issue of wrestling. I assure you all that I will work to raise this issue. Government at every level, And future decisions will be made as the players see fit.”

For the second day, Bajrang Punia, Sakshi Malikkh, and Vinesh Phogat, among others, gathered at Delhi’s Yantar Mantra and were joined by other members of the fraternity.

Vinesh, the first Indian woman wrestler to win gold at both the Commonwealth and Asian Games, alleged, “Coaches are harassing women and some coaches, who are federation favourites, misbehave with women coaches too. They sexually harass girls. WFI president sexually harasses many girls.” did.”

Earlier on Wednesday, Delhi considered the protest staged by wrestlers, including Olympic and Commonwealth Games (CWG) medalists, where women wrestlers made serious allegations of sexual harassment by the Wrestling Federation of India (WFI) president and coaches. And for mismanagement in the federation’s proceedings, the sports ministry has sought an explanation from the WFI and directed it to respond to the allegations within the next 72 hours.

The ministry also said that if the WFI fails to reply within the next 72 hours, the ministry will initiate action against the federation as per the provisions of the National Sports Development Code, 2011.

Meanwhile, Wrestling Federation of India (WFI) president Brij Bhushan Sharan Singh on Wednesday said that the wrestlers, who have alleged sexual harassment against the coach, should have approached the federation with their names earlier.

The WFI president said 97 per cent of the wrestlers were with the BFI and those protesting were pressured.

“97 per cent players are with the WFI. I am hurt by allegations of sexual harassment. A player cannot make such allegations against me or the head coach. Some wrestlers were pressured to sit on a sit-in,” Singh said.

He claimed that star wrestler Vinesh Phogat had claimed a few days ago that the head coach should be changed, but a coach cannot be changed at the will of a player.

“A few days ago, in a meeting, Vinesh (Phogat) demanded to change the head coach. A coach cannot be changed based on a player’s wish and desire. We have to think about the players from other states as well. They should have brought the names of the coaches, who they claimed were sexually active. was involved in harassment,” Bhushan told ANI.

She denied any sexual harassment and claimed that she would hang herself if it happened.

“There has been no incident of sexual harassment. If it had happened, I would have hanged myself,” the WFI president told a press conference.

He also said that he is ready for investigation.

“Sexual harassment is a big allegation. How do I take action when my own name is dragged into it? I am ready for an inquiry,” he added.