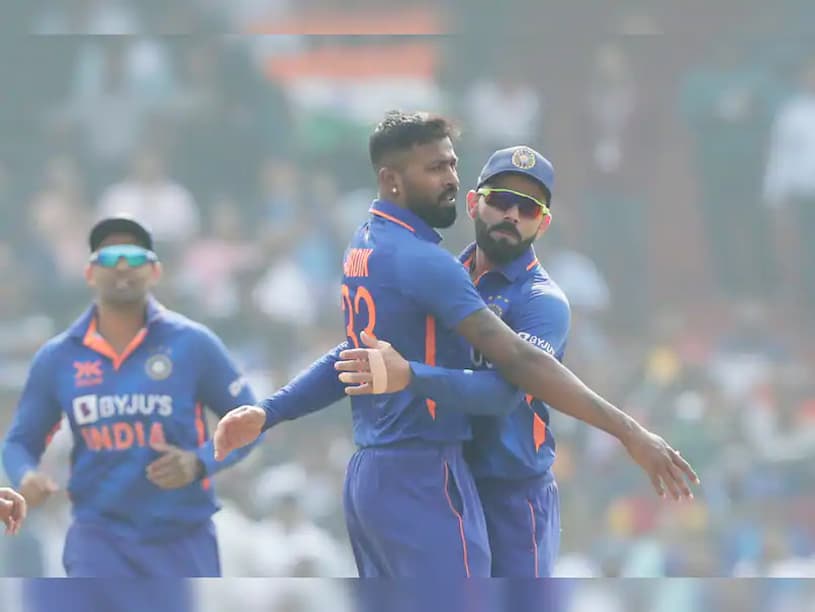 between India and New Zealand during the second one-day international in Raipur on Saturday. Hardik Pandya took a stunning one-handed catch to dismiss Devon Conway.

New Zealand got off to a disappointing start. Which got worse when Conway hit a shot that went right back to Pandya.

Although the all-rounder was slightly off-balance, he managed to catch the ball left-handed. The crowd erupted into applause and Conway was clearly stunned by the athleticism on display.

India’s pace attack led by Mohammed Shami bowled out New Zealand for 108 runs on a tough surface.
After New Zealand fell to 15 for 5 in the 11th over the fervent fans who thronged the distant Shaheed Bir Narayan Singh Stadium for Raipur’s first international match feared an early end.

On the helping pitch, Shami (3/18) and Mohammad Siraj (1/10) used high-quality seam bowling to make life difficult for the batsmen. Batters had to work harder due to oddball stops.

Stepping out to hit Shami over cover, Bracewell made it clear what he wanted to do. In the 19th over, after hitting Bracewell for back-to-back fours, Shami bowled a quick bouncer. Bracewell tried to pull the ball away, but it bounced back to the keeper.

A pair of 47 runs in the seventh wicket. Mitchell Santer (27), who scored a fifty in Hyderabad, joins Phillips to take the team past 100. However, both were run out in six balls to end New Zealand’s hopes of a recovery.

Phillips caught Suryakumar Yadav in control at deep midwicket on the long hop off Washington Sundar (2/7). When Santner plays a slower ball hidden on the stumps from Hardik.