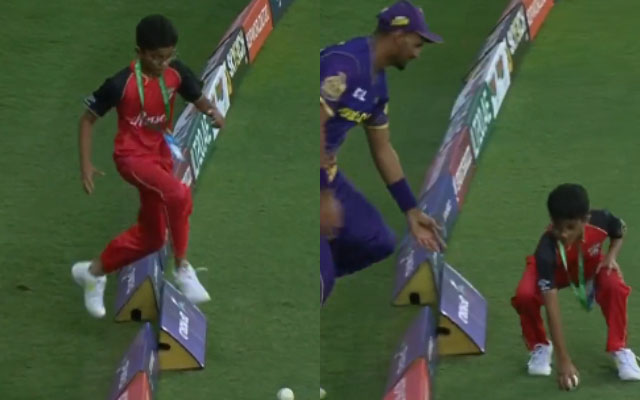 On Wednesday, January 18, a unique incident took place during the game between Desert Vipers and Abu Dhabi Knight Riders. International League T20 Sabir Ali of Tournament Knight Riders fell on the ropes while trying to save the ball on the boundary line when a ball boy entered the field, picked up the ball and handed it to the fielder.

While the Desert Vipers were chasing a target of 134 runs set by the Knight Riders, Sherfan Rutherford edged the ball to the ropes off a Sunil Narine delivery for 15 runs.m Over Sabir Ali ran after the ball and returned it to the playing area just inches from the boundary rope. The ball boy then walks in and hands the ball to Ali, who throws it to the wicketkeeper.

Meanwhile, the batters scored three runs, and since it was not declared a dead ball even after outside interference, three runs were awarded. The fact that the Vipers conceded three runs during the event greatly amused the Knight Riders fielders and even the commentators.

Ball Kid was ready to take his chances🤣

This boy will tell some stories at school tomorrow! pic.twitter.com/TmWcjyQGdY

The umpires’ decision was correct according to the MCC Laws, Rule 20.4.2.12 states that:

“Either the umpire shall call and signal a dead ball when he considers that it has been damaged by a person, animal or other object in or on the field of play. However, if both umpires feel that the ball has reached the boundary regardless of the interference, the boundary shall be awarded.”

In addition, another section of the law states: “No person, animal or object entering the field of play or having contact with the ball during play shall be deemed to be a boundary unless the umpires determine otherwise. Contact between the ball and such person.”

If an outsider enters the field while the ball is in play, the umpires have the final say on whether to declare a dead ball or give a boundary. The ball was not ruled dead because the ball kid did not endanger either team by its presence and simply scooped the ball once it was off.

A four was not signaled as it was impossible that the ball would have reached the boundary in such circumstances even if the ball had not been picked up. The Vipers would have scored a four, though, had he picked the ball before it stopped and there was a strong chance it would go through the ropes. Law states that the ball would have been a dead ball if the youngster had interfered and obstructed Ali’s attempt to follow-down a run, preventing the fielding side.