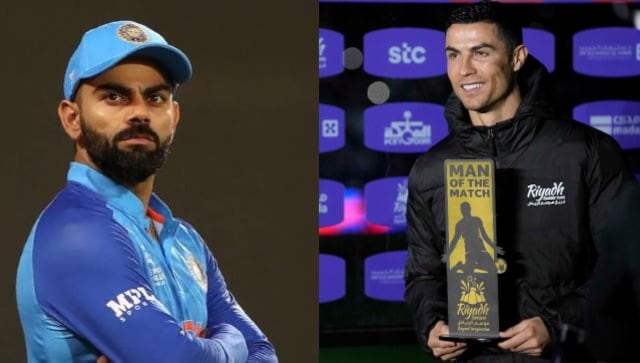 Virat Kohli, who has expressed his admiration for Ronaldo several times, took to Instagram to praise his favorite footballer.

Virat Kohli posted an Instagram story after Cristiano Ronaldo’s player of the match performance in the friendly match between Riyadh XI and PSG. Ap

Virat Kohli slammed Cristiano Ronaldo’s critics after the superstar scored two goals for Riyadh XI in a friendly against Lionel Messi’s Paris Saint-Germain (PSG). Ronaldo, who left Manchester United for Saudi Arabian club Al-Nasr, was named in an all-star XI from the country to play against PSG, which also meant a reunion between Messi and the Portuguese footballer.

Messi scored for the French side as a 10-man PSG XI beat Riyadh 5–4, with Ronaldo earning the man of the match award for scoring twice in the game.

Kohli, who has expressed his admiration for Ronaldo several times, took to Instagram to praise his favorite footballer and also took a dig at pundits who recently criticized the former Real Madrid and Juventus player.

“Still doing it at the highest level at 38. Football pundits sit and criticize him for attention every week now conveniently calm that he has put in this kind of performance against one of the world’s top clubs. And he’s apparently over,” Kohli wrote on his Instagram story.

Ronaldo came under fire from pundits after giving an explosive interview to British TV personality Piers Morgan. In addition to taunting manager Erik ten Haag, Ronaldo also attacked his then club Man Utd in the interview. Soon after the interview, the footballer parted ways with the club by mutual consent.

He then signed a contract worth over 200 million euros for Al Nasr.

Speaking of Kohli, the star batsman will be seen in action in India on Saturday Second ODI against New Zealandwhich will be played in Raipur.