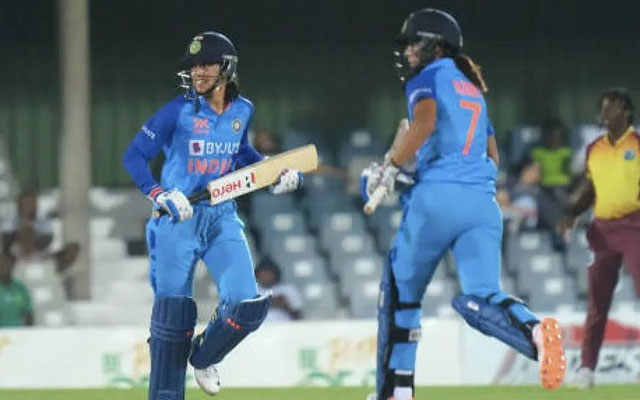 Team India crushed West Indies by 56 runs to register their second win in a row Women’s T20I Tri-Series Monday, Jan. 23 at Buffalo Park. The win was set up by returning Indian captain Harmanpreet Kaur and her deputy Smriti Mandhana, who put on an unbeaten 115 in the first innings, taking their side to a challenging 167/2.

Windies needed a solid effort to chase the target on a surface that was not the easiest to bat on. Their chase was derailed before Brittney Cooper was dismissed for a golden duck by Deepti Sharma in the second over. Her opening partner Rashada Williams was also dismissed cheaply to end an unusual powerplay for the Women in Purple.

It was only after Shabika Ghaznavi’s powerplay that the Indian bowlers piled on their opponents. Shemain Campbell and Windies captain Hayley Mathews showed glimpses of a comeback, which never materialized as the Indian bowlers did not allow them to run freely. Campbell fell three short of a struggling half-century and despite Mathews’ best efforts, the Windies could manage just 111 on the board, handing India a comfortable win.

Returning Indian captain Harmanpreet Kaur won the toss on a two-speed surface in East London and elected to bat first. Young Indian opener Yastik Bhatia could not capitalize on his start and fell in the last over of the Powerplay. Harleen Deol also departed cheaply, bringing hard-hitter Harmanpreet Kaur to the crease.

Kaur, along with Smriti Mandhana, steadied the ship after the fall of these two early wickets. Although the Windies bowlers smothered the run-scoring opportunities, India continued to lead the contest without losing any more wickets. Chasing a challenging score after the 14th over, the experienced Indian duo took the bowlers on the attack.

Both batsmen went into overdrive in the death overs, scoring 18 runs in the 18th over of the match. Mandhana hit another eye-catching half-century, unbeaten on 74 off 51 deliveries, while his captain dazzled his way through a 35-ball 56, helping India to a mammoth 167.

Here’s how Twitter reacted to India’s dominance in Windies:

A strong performance from India #T20WorldCup Warning shots to the rest of the field 👊#INDvWI Scorecard https://t.co/UvAGEmnfPg pic.twitter.com/ZsTF6TM40q

For his superb unbeaten 7️⃣4️⃣*(51) in the first innings, vice-captain @Mandhana_Smriti Won the man of the match award #TeamIndia A 56-run win over the West Indies gave them their second win in the tri-series 👏

Player of the match Smriti Mandhana to the team (and media) manager: “Aaj bahut log hai (Several of them turned up at the presser today)”.

A smile followed the astute observation.

solid as one #T20WorldCup Dear 🏏

Several Indian batsmen stood out in their T20 win against the West Indies 👊#INDvWIhttps://t.co/9p5ElaHbyO

Most runs as an opener in women’s T20Is

Smriti Mandhana is third with 2500 runs#INDvWI

Caught fever as he landed in SA, missed 1st match, came in 2nd match in tough conditions…scored 56*(35)…like a boss