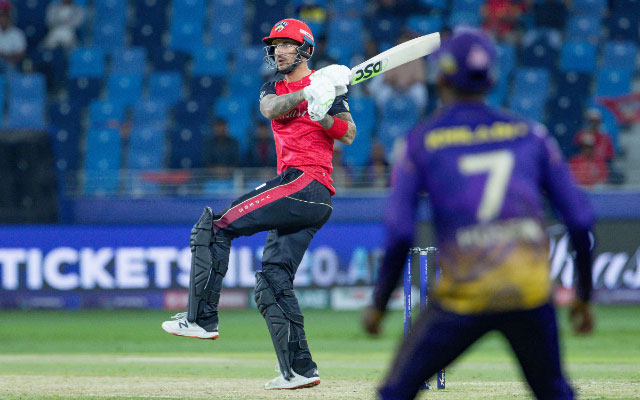 Desert Vipers defeated Abu Dhabi Knight Riders by seven wickets in the seventh match of the International League (ILT20) 2023 in Dubai on Wednesday, January 18. The win saw the Vipers move up the points table by winning both their matches. On the other hand, Knight Riders have lost all the three matches they have played so far at Rock Bottom.

Desert Vipers displayed a clinical performance in all categories of the game as a result of which they were rewarded with a well-deserved victory. They suppressed the opposition from the start and did not allow them to make a comeback in this contest.

Vipers captain Colin Munro won the toss and elected to bowl first. Even as the Viper bowlers tore apart the Abu Dhabi top-order from one end, it was difficult to contain Caribbean sensation Brandon King, who scored a counter-attacking half-century.

King scored a crucial 44-ball 57 and stayed at the crease until the final over before being dismissed by Gus Atkinson. Apart from Brandon King, only Charith Asalanka (26) showed some resistance in what was a miserable scorecard for the Knight Riders. Even their key power-hitter Andre Russell failed as they were restricted to 133/8 as they were dismissed for a golden duck on the day.

A straight chase for desert vipers

In reply, Vipers got off to a good start chasing a short score before the latter was dismissed after Alex Hales and Rohan Mustafa (23) added 39 runs. Hales then successfully scored 64 off 47 balls and Abu Dhabi captain Sunil Narine was bowled for 15 runs.m Over

However, it was too late by then when Englishman Sam Billings added the finishing touch in the 16th over of an unbeaten 35 off 29 balls.

Another win for @TheDesertVipers inside @ILT20 is official. What an innings he played @AlexHales1 and fantastic spelling by @wanindu49 #ILT20

Now the top of the batting order is blazing. He did not bat for some time in UAE. Alex took the Desert Vipers to a flier with Hales. Absolutely crushing 📸@PressSnapper pic.twitter.com/QDhQgND58y