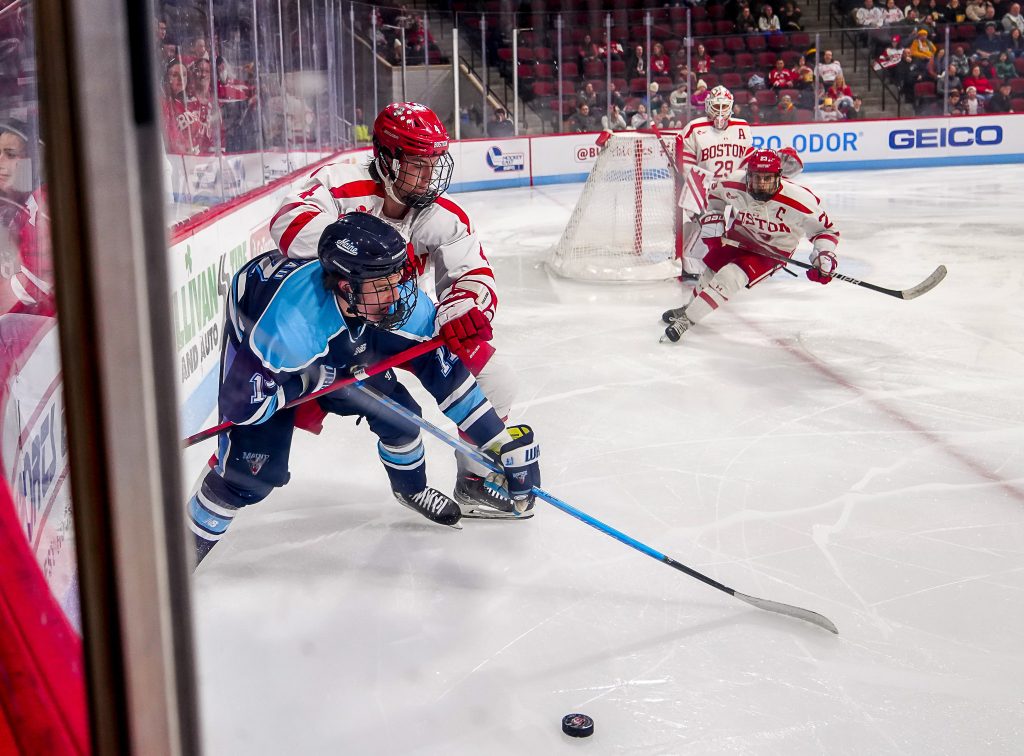 “I liked our start to the game, going 2-0 up very quickly. I thought we got off our game after that –– I didn’t think our execution was very good tonight,” head coach Jay Pandolfo said after the match. “At the end of the day we got the win so that’s important. Not overly happy with our effort but we did enough to win tonight, but we must be better tomorrow night.”

The Black Bears got a penalty kill just ten seconds into the first period after sophomore forward Nolan Renwick was sent to the box for holding. The Terriers’ second power-play unit took advantage of the first opportunity and scored one of the prettiest goals of the season.

In a tic-tac-toe sequence, Quinn Hutson passed it to Jeremy Wilmer at the top of the key who then passed it to Ryan Greene in the slot. Green sent the puck past two Maine defensemen on his backhand, finding a wide-open Luke Touche near the right post to dump the rubber at 1:53. I will link the replay here So you can watch it as often as I have. The numbers were huge for Tuch who had scored just one goal in his last 12 games coming into tonight.

The BU faithful (and BHB members in the press box) held their breath minutes later when captain Domenic Fensor came down hard on the boards in the corner of his defensive zone. The senior defenseman was crushed by two Maine players simultaneously and crouched on the ice as the delayed penalty was signaled.

With junior goaltender Drew Comeso leaving his crease, team points leader Matt Brown streaked two-on-one with Devin Kaplan down the left side and wristed it into the back of the net to make it 2-0 at 4:05. It was the tenth Hobey Baker nominated season, marking a new career high.

“I think how I approached the year, what I did in the summer,” Brown said of the change in his preparation. “I’ve taken a lot more care of my body, how I’m eating and how much I’m working out so I feel like it’s taken me to another level.”

After the goal, freshman winger Thomas Friel was dealt a five-minute major and game misconduct for a hit from behind on Fenso’s play. Fenso was able to stop Sting and come back after a few shifts.

BU was unable to convert on the ensuing power play which was cut short by a Green tripping penalty at 6:32. Nevertheless, the Terriers continued to be tough on pucks and provided a strong forecast for the rest of the opening frame — a good example of “starting on time.”

Junior Nick Zabaneh extended his team’s lead 3:52 into the middle stanza, connecting with senior forward Sam Stevens for his fifth of the 2022-2023 campaign. Outside the crowd, Stevens sauced the puck across the crease to knock on Zabaneh’s door. The No. 10 has really proven himself over the last month and has found a new consistency in his game that we haven’t seen from a forward before. He has really developed into a difference-maker for BU.

“I don’t really identify one thing,” Zabaneh said after the game. “I think it’s just working in practice, finding chemistry with your linemates and competing every day. Bounce is running late for me so try to keep it going.”

Jay O’Brien got back on the scoresheet for the first time since Dec. 3 with a wild floater from above the right faceoff circle. The lamplighter at 9:23 was reviewed for goaltender interference but was ultimately ruled a good goal and the lead extended to 4-0. O’Brien is another guy you love to see rewarded.

A delayed tripping call by junior defenseman Cade Weber at 17:55 led to Maine’s first lead of the night. Snapshot by sophomore forward Cole Hanson made it 4-1 but the Terriers were able to kill off the rest of the minors as the period ended.

Fensor was not on the bench for the final 20 minutes of regulation after skating in the second period. Pandolfo said he did not know Fensore’s availability for tomorrow’s tilt.

“I haven’t received a full report yet,” Pandolfo said. “I don’t know if it was a precaution. We will have to reassess and see how he is tomorrow.

After a delayed penalty call in Maine, Kaplan scored his ninth point in seven games with a nifty backhander that he let loose as it circled in front of the net. Assisted by Brown and Lane Hutson, Kaplan’s goal brought the match to its final score of 5-1.

Although the Terriers were not happy with their performance throughout the 60 minutes, they found a way to win by a huge margin. As past stories have proven, Maine is not a team to be underestimated, so BU will have to make some adjustments for tomorrow night’s 6:00pm contest at Agganis.

“We were turning the puck over a lot more than we normally do — we were overcomplicating the game,” Brown said. “Just keeping it simple, playing fast, using our speed and executing our passes is going to be a big difference for us.

The Boston Hockey Blog will have full coverage of the rest of the series so be sure to follow along on Twitter @BOShockeyblog and Instagram @boston.hockey.blog.