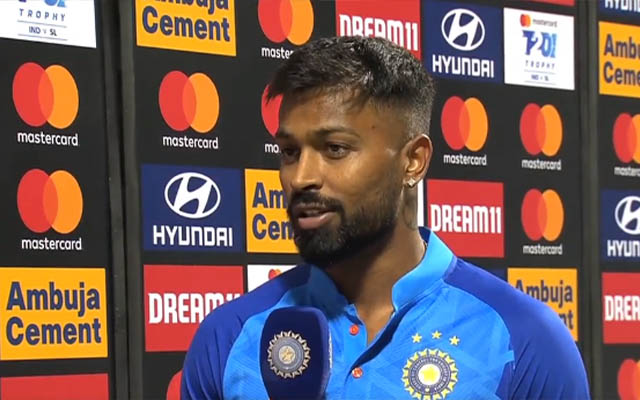 After a great start to the innings, the Indian middle-order Ishan Kishan and Suryakumar Yadav struggled to maintain the momentum without contributing much. With 313 runs on the scoreboard, India lost Washington Sundar for their sixth wicket. However, pace all-rounders Hardik Pandya and Shardul put together a crucial seventh-wicket stand of 54 to take India past the 380 mark.

I am thankful to Shardul for listening to me: Hardik Pandya

Hardik scored 54 off 38 balls and hit three fours and three sixes in the process while Shardul contributed 25 runs at a strike rate of 147.05. Both players kept the strike rotating with singles and doubles and looked comfortable in their partnership.

At the end of India’s innings, former head coach Ravi Shastri asked Hardik who was giving advice to whom, to which Hardik replied with a cheeky smile on his face. He revealed that Shardul had faith in him and let him direct the gameplay.

“Fortunately, I was happy that Shardul believed in me and let me dictate the conditions inside. But he always has his say and I always try to listen, but at the end of the day, because of his faith in me, he does what he does. I want it right. . So, in our partnership, it came together but I am thankful to Shardul for listening to me,” Hardik told Ravi Shastri.