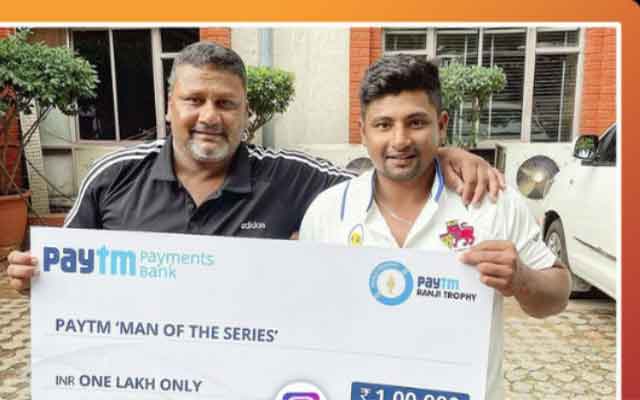 How Sarfraz Khan’s father Naushad describes it Sarfaraz He says a heartwarming line that touches his heart. Khan is rising in domestic cricket and runs for fun. He has become a key batsman for Mumbai and a key part of the Mumbai line-up in the ongoing Ranji Trophy. He has been knocking on the door of the Indian Test team for quite some time but has not received a call-up.

Khan has scored an excellent average of 500 runs and has helped Mumbai a lot in winning games in the Ranji Trophy this season. Sarafraz has scored 2000 runs in the last three seasons of Ranji Trophy. So there is a lot of talk about being in the Test squad even though there are vacancies at the preferred spots.

The cricketer has played with many great cricketers so far in his career but his father narrated a story when he played with Arjun Tendulkar, son of Mumbai batsman great Sachin Tenulkar.

Naushad said that when Sarfraz Khan used to go to junior games, he would play and meet Arjun Tendulkar. One day, a young Sarfraz approached his father and said (as quoted by The Indian Express), “Abbu, Arjun kitna naseeb wala haina? He has everything in his life like car, iPad etc.” Naushad was helpless and said nothing.

Khan then came back and hugged his father tightly and added that, “I am luckier than him because my father can spend the whole day with me. Arjun’s father cannot spend enough time with him.”