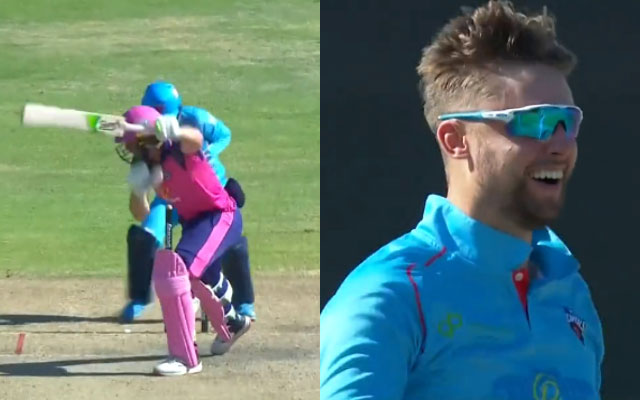 Pretoria Capitals’ Will Jacks hits two crucial knocks in an over against Pearl Royals in his 18th consecutive match SA20. The Capitals were coming off an impressive win in their previous outing and were looking to register back-to-back wins against Pearl.

Batting first, Pretoria registered 158 runs for the loss of six wickets in their allotted 20 overs. In reply, Royals began their run chase just as planned with opener Wihan Lubbe and Englishman Jason Roy stitching a crucial 48-run partnership before the end of the powerplay sent the latter packing.

Interestingly, Will Jacks took the ball in the 16th over hoping that he would pull off a miraculous breakthrough for the team and bring them back into the contest. The spinner backed it up with his brilliant deliveries as he dismissed the likes of Dane Vilas and Jos Buttler. The dismissal of these two batsmen momentarily brought momentum towards the end of Pretoria’s chase.

The delivery that dismissed Buttler was peachy. Inviting a drive from the batter, the ball pitched off-stump and took a long way to disturb the furniture, shocking the Royals skipper.

After the dismissals of Villas and Butler, the onus was on captain David Miller to register a win and secure the vital two points. The veteran southpaw hit the ground running quickly for him and displayed some fine skills with the willow.

With just two balls to spare in the final over of the clash, Mitchell van Buuren scored the winning run by crossing the gap at offside point for a boundary in a thriller of a contest.

As the business end of the season is on the horizon, teams need to step up and get results in their favor to make it into the elimination rounds. Pearl will play their next match against Sunrisers Eastern Cape on Tuesday 24 January and will be aiming to get those two points and move up the table.