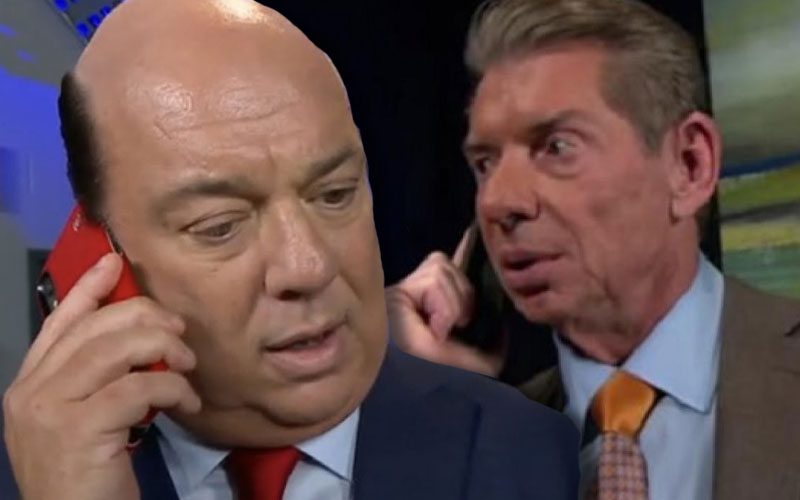 Paul Heyman, the mastermind behind ECW, shares a very personal relationship with Vince McMahon. Over the years, Heyman has become a confidant of Vince’s, handling business both on-screen and off-camera. Despite burying McMahon in his original pipe bomb promo, Heyman has great respect for the WWE executive chairman of the board.

on the latest “FTR with Dax Harwood” Podcast, Dax Harwood shared a story about Paul Heyman when Heyman was the director of Monday Night RAW. Needless to say, it was an entertaining story.

“So it’s around November 11 or something. It was close to him. We have been on this long journey. We were gone for a long time. I remember between October and November, we were home, me and Cash, home for three days because the tour broke up. We went to China and Saudi and then Australia. We’ve done things like in the UK and Ireland. The tour was split into two different tours. Everyone managed to do half the tour. Like, for example, half the roster did the first half, and they brought in a whole new roster for the second half, except for a few guys like Roman, who just signed a new contract making a ton of money I think Seth too, maybe. But other than that it was me and Dan the whole tour.

Dax Harwood said while he doesn’t hold anything against Paul Heyman, he couldn’t help but refer to him as “carny” when he called out Vince McMahon after he and Cash Wheeler revealed their decision to miss RAW. Stay with their families.

“After the tour was finally over, I think we were also ready to go to NXT, which was on Wednesday. They wanted us to go to RAW. We were drafted to Smackdown. They wanted us to go to RAW. We were called by travel, WWE Travel Services, to tell us that we were needed for RAW and we lost it. As we said. ‘Absolutely not.’ We were on the road for 17 days. Like I said, three days at home is a month and a half or whatever. I think we said, ‘What are we doing?’ They said, ‘Well, creative right now is you guys are going to come and attack Randy’, which is crazy because the tour is telling us that. ‘You’re going to attack Randy, and then NXT is going to jump you and beat you.’ We said, ‘No, not at all. We are not coming to do that.’ They said, ‘Well, they’ve scheduled you. They need you.’ I said, ‘We’re not doing that. We’re not going to do that.’ ‘Have Heyman, who was booking at the time, call us and tell us.’

On April 10, 2020, Dax Harwood and Cash Wilder were granted their release from WWE. Both were frustrated with Vince McMahon’s ridiculous booking in the tag team division. Harwood and Wheeler were convinced that WWE’s Tag Team Championship was meaningless.

“We were in a hotel room and Paul Heyman called us. He said, ‘Hey guys, I heard there’s a problem with you guys not wanting to come to RAW.’ We said, ‘Sure. This is our agreement. We haven’t been home in a long time. We are SmackDown guys. We just had to go to NXT today. Why do we have to be there?’ ‘Well, we have to do it. You are an important part of this angle’ we said, ‘Well, what is it? ‘Well, we want you to finally break the deal with Randy. You will kill him.’

I said, ‘What happens next’, which we didn’t want to do anyway. ‘NXT is going to attack the ring, and you’re going to have NXT beat the sh*t out of you, which is going to set up some things later.’ I said, ‘No, we’re not doing that. I’m sorry.’ I said, ‘Paul, we were told through the tour that we have the creative for RAW. We are hoping to go home. I’m going to see my wife and my daughter, and we’re told by our travels.’ He said, ‘Wait a second.’ The phone was in his mouth. Paul thinks he’s this incredible worker, like, I mean, he’s a great carny. Let’s just put it like that.

He says, ‘Hey Vince, yeah, it’s The Revival. Yes yes, they have been told by travel. Can you believe that Vince?’ ‘Yeah, Vince can’t believe it either. He can’t believe you’ve been told by travel what your creative was.’ He said, ‘Vince, what do you think?’ It was such a playful thing to do. We said, ‘Paul, we’re not going to be there. We can’t do that. I will go home to see my family.’ He said, ‘Wait a second.’ ‘Vince. They said they couldn’t. They want to visit their family. Yes, I think they should too. Yes, I think it’s a great idea.’ ‘Okay guys, so I’m going to talk to Vince a little bit more, but we think we got you off that RAW.’ All right. It was like, ‘Man, we know you’re not talking to Vince. We know he’s not there.’

“So that was some of the things we had to deal with at the time. I don’t blame Paul for that. You know what I mean? I don’t blame him for that. I don’t hold any hard feelings towards Paul for that because I think, I think he was a fan of ours, but I think he was doing what his job led him to do, but it’s also like, you can be straight with us. You can be honest with us.”

Dax Harwood didn’t hold back on revealing his low dollar deal with WWE. The He used to earn a 6-figure salary in WWE There was no fair remuneration for his rigorous schedule before release.

On the May 27, 2020, episode of Dynamite, FTR made their AEW debut, rescuing The Young Bucks from The Butcher and The Blade. Last year, FTR cemented their legacy as Triple Tag Team Champions by simultaneously holding the AAA, ROH, and IWGP World Tag Team Championships.