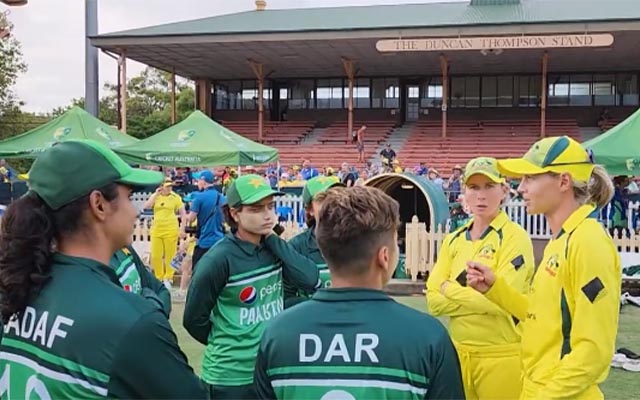 Watching two teams battle it out on the field is something that sports fans often witness but rarely do we get to see players from opposing sides come together and have a spirited conversation after an intense day of cricket.

The latter side, however, was on display for all to see when players from the Australian team and the Pakistan team came together for a chat after the third ODI ended at North Sydney Oval on Saturday, January 22.

The Pakistan Cricket Board (PCB) posted a video of Pakistani players including Nida Dar, wicketkeeper-batter Sidra Nawaz, Fatima Sana, Tuba Hasan interacting with Australian captain Meg Lanning, Jess Jonassen and co and it looks like a healthy chat. Among the athletes, Dar was also seen interacting with some Pakistani fans who had gathered at the venue for the game.

The Pakistan team is currently in Australia on a white-ball tour that includes three T20Is and three ODIs. The ODI series had just ended and Australia had won all three matches by a margin.

Beth Mooney was the star batsman scoring 191 runs in three matches at an average of 95.50. Renowned Australian all-rounder Ashley Gardener was the joint-highest wicket-taker in the series with five wickets at an economy of 3.15.

One fan was lucky enough to get a jersey signed by Pakistan all-rounder Nida Dar. The fans seemed overwhelmed by her gesture and then Nida proceeded to click a few photos with other fans.

The three-match T20I series is set to begin this Tuesday (January 24) and Pakistan will be hoping for a better performance after a disappointing display in the ODI series. The series will be crucial as the Women’s T20 World Cup is just around the corner and Australia will be hoping to add another title to their already illustrious trophy cabinet.