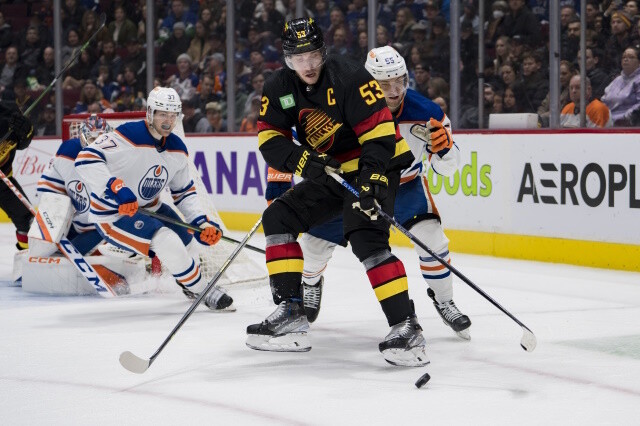 Marek: “Now, one of the players we’ll be keeping an eye on, and who knows how long he’ll be here in a Canucks uniform for Rick Tocchet, is Bo Horvat. For those who didn’t watch Hockey Night in Canada on Saturday you talked about him, what’s the latest on Bo?

New Jersey is a team that I thought about because I think they’re going to add. But somebody made a good point to me, they said, you know they have (Nico) Heasier and they have (Jack) Hughes and they really believe Hughes is a center. I mean the guy scored 30 goals this year. You don’t screw around with his success.

So does Horvat have any money there? I think Meyer is more likely New Jersey’s target than Horvat but I think they were close to it.

You know I’m really surprised by the team here, and this is just my opinion. If it’s true because Steve Yzerman doesn’t say anything, that Larkin and the Red Wings are having trouble closing the deal, I wonder if Detroit is even in it.”

Marek: “But it also has to be based on an extension. No?”

Friedman: “Yeah, and one thing is, I don’t think Vancouver is interested in allowing it.”

Marek: “It doesn’t sound that way at the moment.”

Marek: “What’s the word for? I’m drawing a blank here Elliot. Is there a word for that? A nasty word that people like to blame on the other party but never themselves. What’s the word I’m fishing for?”

Friedman: “I’m not familiar with it?”

Friedman: “There are always groups we don’t know about.”

Marek: “Going back to the point about the New Jersey Devils and ya, Nico Hisier, who started this program here a while ago with joy and we thank him for that, and Jack Hughes in the middle and you want to tell yourself, what’s the use of Bo Horvath there. ? Talked to someone on Saturday who said, listen, how many times have you heard someone or a group say, ‘Yeah, you know we had a problem, we had too many centers.’

Eliot, I can assure you that sentence was never uttered. Yes, we have many centers.”