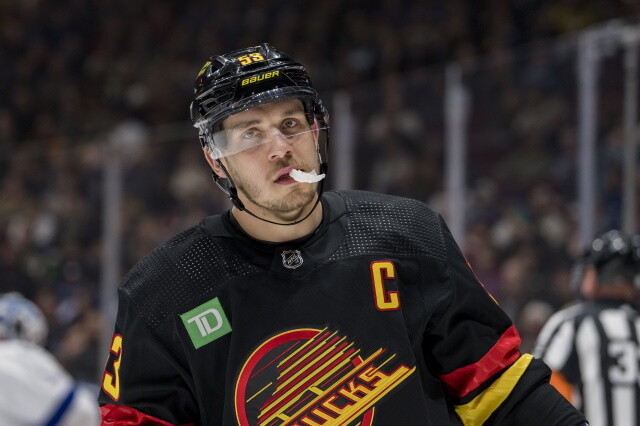 Sportsnet: Elliot Friedman and Jeff Marek on 32 Thoughts: The Podcast – Bo Goes? Vancouver Canucks and the latest on Bo Harbhat.

Friedman: “I think it’s intensified this week. I don’t know if that’s going to happen for sure, but I believe some teams have stepped up and indicated they’re serious. We’ll see where it goes.

Again, this situation is fluid. They may change but no one denied me that there was some intensity.

Now, who are we talking about here? I guarantee you I miss the parties. I have no doubt that I’m missing teams because I think there are teams involved in some things this year that, or at least discussions that I’ve missed.

I think Seattle is in between. I think Minnesota is around but they can only do him as a rental. I think Boston was around it but it’s not easy for them to do it.

Friedman: “I haven’t heard them but that doesn’t mean it. by knowledge

Carolina. I don’t know what to do with it. I think Carolina, they don’t pay rent. At least they don’t charge high prices for rent. But I think they want to win, so I won’t discount them.

Marek: “It will fit what they need.

Marek: “Like we need here and are looking for teams that are used to taking big swings. That’s Carolina.”

Friedman: “Yeah, but you know, that’s the fare, usually not their way.

I think one thing about Seattle, I think Seattle will do this to keep him. And one thing about the Kraken, again, I want to stress, if they’re in, they should do it first so they have him and they can start talking to him.

Marek: “Here’s what I’m thinking. Last podcast, what did we talk about? Trying to accomplish everything at once. Get your big stuff out of the way.

Listen, we’ve all seen shows or clips from TNT on Wednesday nights and how the boys were having fun Rick Touchett. And now there is news that Bo Horvat’s situation has intensified.

This is where it’s going, we’re trying to get everything done here as quickly as possible, and get this behind us.

Marek: “That would fit Jim RutherfordIts MO. One thing we know about Rutherford is that he doesn’t like to wait for deadlines. It was in 2006 when he won the Stanley Cup with the Carolina Hurricanes.

Friedman: “But I think in this particular case, it takes two to fix? You’re not doing a stupid trade. Other teams have had to do it. Real. I think what’s changed here, I think some other teams have gotten serious.

You know Jeff, I’m really wondering which team here, would be the absolute wild card, Tampa. It won’t be easy but I know they want to win. I had a guy who told me, I don’t think they can do it, but I think they’ll try.

Marek: “Jeez, what would they be willing to pay? Like me, you and I talked about this the other day, and Tampa is always ready for players from Syracuse to come in and they can make the jump.