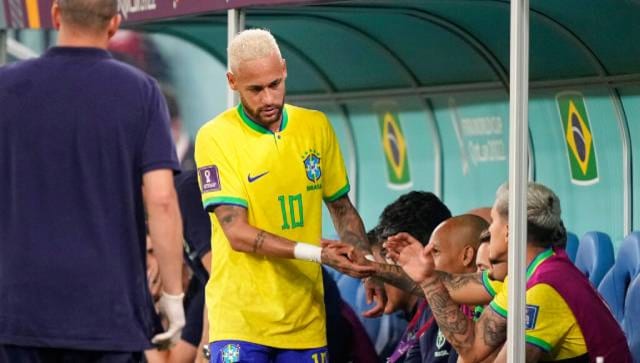 Brazil’s Neymar walks to the bench after being substituted during the World Cup Round of 16 soccer match between Brazil and South Korea at Stadium 974 in Doha, Qatar, Monday. Ap

Brazil soccer star Neymar admitted on Monday that he spent a night crying, fearing he may not return from the injury that has forced him to miss the ongoing FIFA World Cup group stage matches.

Neymar made a successful return to action on Monday night as he starred in Brazil’s 4-1 win over South Korea in the Round of 16. The ankle, along with a small bone spur, has already forced him to miss two group games. The injury certainly brought back fears of missing the 2018 World Cup semi-final with broken ribs as Neymar feared the worst.

“For sure, there were a lot of fears (about the injury),” Neymar told SportTV on the pitch after the match. “I was doing very well, a very good season, and it’s very difficult to sustain an injury like I have. I spent a lot of crying nights, my family knows, but everything is fine. It was worth it, worth the effort. I treat with the physiotherapist till 11am that day and 5-6am on other days. All suffering is justified so that we can crown a title.”

The 30-year-old striker thanked his family and teammates for their support as it kept him strong through the weak phase as a lot of things bothered him. Neymar also added that he is here to win the World Cup.

“A thousand things happened when I was injured: doubt, fear… and all kinds of support from my teammates and family. I received good messages, sending good energy. It gave me a lot of comfort. Thank you to those who prayed, sent messages. I can’t thank you enough. Now I will do everything to win the national team, I am here with this mission,” he added at a press conference.

Brazil next face Croatia, who beat Japan earlier, in the quarter-finals at the Education City Stadium on 9 December.