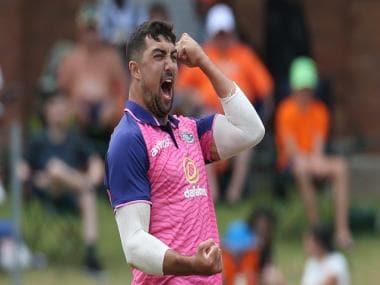 All-rounder Evan Jones had to wait for almost six hours for the inaugural SA20 by the Pearl Royals franchise to finally be played but when it happened, his joy knew no bounds with his parents after the news broke.

Jones was determined to make the most of the opportunity knocking on his door. In a very short time, he has already become an integral part of the Royals setup and has put in some impressive performances with the ball.

Jones took 10 wickets in his first six matches, including a four-wicket haul.

In a private conversation with Dr News18 CricketNextJones talks about his journey, his cricketing idols and the experience of being surrounded by some big names.

Talk to us about your journey so far

Sports are a big thing in schools in South Africa and I always loved playing cricket. In high school, I had the opportunity. I played for Northerns back then but it was at the Under-19 level when I decided to take up the game and see what cricket had in store for me in the future.

What was your first reaction when you found out that the Pearl Royals had signed you?

By the time I got home it was 2pm because the auction had started and I got up around 8:30pm. So, it was six hours later. My mom and dad were with me so it was a special moment for me and experiencing everything with them. After that came many emotions. Being picked by a special franchise like the Royals was special.

Who called you first from the Royals?

It was a lot of emotion. I can’t really remember (laughs) but I remember getting a very good message from JP (Dumini). They have welcomed me into the Royals family which means a lot to me.

You have some world class players in your line up. How was the experience?

Players who have played at the highest level for so long and played in so many competitions like Lungi (Ngidi), Jos (Butler), David (Miller), all those types of people, to talk to, share the dressing room and get knowledge is really helpful. The world beater is really lucky to be around.

You have a good economy rate. What is the rule that you follow?

Right now it’s just luck (laughs). Right now we play on slow wickets. I think the time I bowl (middle over) helps me a lot.

How do you balance between bat and ball?

There is clear communication with the coaches. Training is usually divided into two groups. Balancing both bat and ball is difficult but the coaches are really open to talk. I’ve been really lucky to work with coaches who give you extra time.

Who is your cricket idol?

Kevin Pietersen is my role model. I always saw him doing his thing. Love watching him bat and love his aura. The confidence he exudes in everything he does is fantastic.