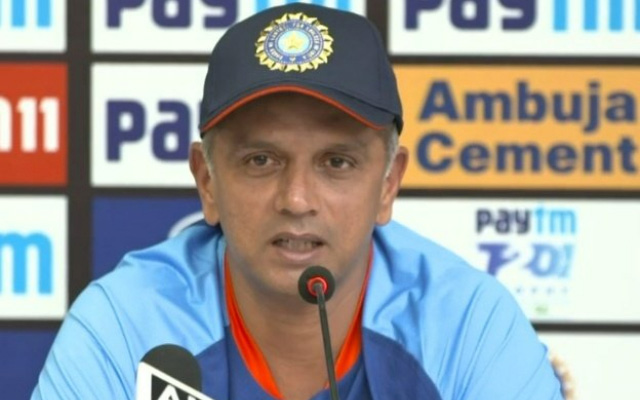 Widely known as ‘The Wall’, the current head coach of Team India, Rahul Dravid, who is known for his serious demeanor on and off the field left commentator Harsha Bhogle confused with his ninja gesture after the end of the 2nd ODI in between. India and New Zealand In Raipur.

After the game, he was seen moving both hands And this shocked Harsh Bhogle who then said on air, “Try and decode it for us.” Dravid was also seen simulating a shot.

Dravid’s gesture came after the end of the game in Raipur when he was carrying out the customary post-match handshakes. India secured an easy eight-wicket win over New Zealand with the foundation laid by India’s relentless bowling line-up which bowled out the visitors for just 108 runs in 34.3 overs.

Man of the match Mohammad Shami opened the proceedings for India by dismissing opener Finn Allen for a wicket in the first over of the match. The 32-year-old pacer struggled to take three wickets in his six overs and conceded 18 runs at an economy of three runs per over.

Gill remained unbeaten on 40 off 53 deliveries with a winning boundary with Ishan Kishan at the non-striker’s end. India chased down the target by losing 2 wickets in 20.1 overs to take an unassailable lead in the three-match series. The last ODI will be played in Indore on January 24.