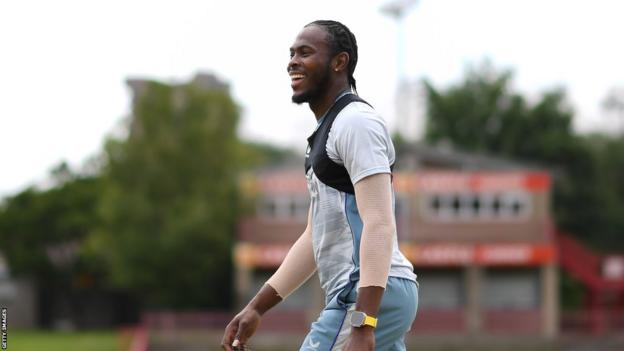 England bowler Jofra Archer says he wants to play in this summer’s Ashes series against Australia.

The 27-year-old is lined up to make his first international appearance for 22 months as part of England’s 50-over squad against South Africa this week.

Archer has been ruled out with elbow and back injuries, raising doubts over his future in the longest format.

But he said he was targeting the series against Australia and wanted to “go hard” to be available.

“I’ve got to fine tune my body for the next two, three or four months, make myself a bit more resilient,” he said.

“Let me sort it out first and then I can look forward to holding the red ball in my hands again.”

Archer quickly became one of England’s most exciting pace prospects in 2019 when he memorably He did ‘super over’ which helped England win the World Cup and marked an eye-opening start to his Test career in the Ashes later that summer – his first season in international cricket.

But his career has been dogged by injuries since early 2021 — first an elbow problem that required two surgeries, then a back stress fracture last May that ruled him out for the season.

Archer made his competitive comeback to cricket earlier this month In South Africa’s T20 league, impressed with eight wickets in five matches, and said he was at “about 80%” of his best form.

“I might have to bowl some extra in India during the week and that’s because I want to play in the Ashes,” said Archer, who was earlier named the IPL’s Most Valuable Player.

“I’ve got to do whatever hard yards I have to to tick those boxes.”

A fit and in-form Archer will be a big boost for England in a year that includes their 50-over World Cup defense in the autumn as well as a bid to win the Ashes for the first time since 2015.

In his debut match for MI Cape Town he took three wickets and recorded a bowling speed of 90mph.

“It’s been good to play cricket and not have to worry about whether my body is actually going away,” he said.

“It looked great, but inside I’m still a little tight and trying to get some rust out.