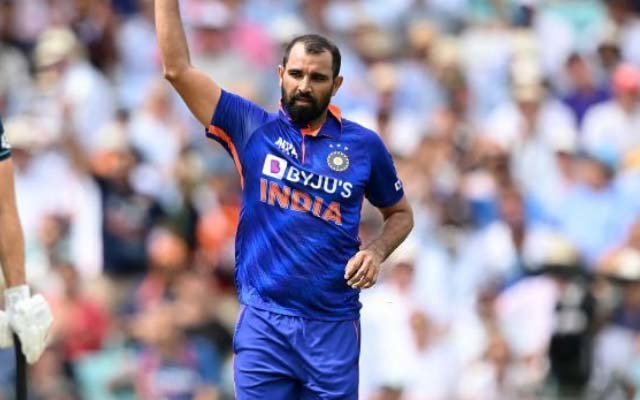 the team India Veteran pacer Mohammad Shami has expressed that he prefers playing matches rather than engaging in practice sessions to maintain optimal fitness. Shami and captain Rohit Sharma powered the Men in Blue to an emphatic series-clinching victory over New Zealand in the second ODI as India won by eight wickets.

Thanks to Shami’s three-wicket haul that set the tone for the match, openers Rohit and Shubman Gill played brilliant knocks to chase down a total of 108 runs. After the win, Shami opined that he would play matches to maintain fitness rather than hitting practice sessions and added that key players would be in a ‘good zone’ ahead of the 2023 ODI World Cup.

“I always prefer playing matches to practice. It is always better to play as many games as possible to prepare for a big event. The load is being managed and it is being managed properly. I just hope the key players are in a good zone (before the World Cup),” Shami was quoted as saying by Indian Express.

World Cup is still far away, we have many matches to play: Shami

With the marquee 50-over event on the horizon, the veteran pacer added that it is too early to finalize the squad composition for the competition.

“If people still doubt despite the results the Indian team has produced in the last four to six years, the World Cup is still a long way off. We have to play a lot of games and try out more players before that,” added Shami.

With back-to-back wins in ODIs, Team India will have to manage the workload of the players to maintain consistency and keep them fit for the mega event. The Men in Blue will take up their next assignment against New Zealand in the final ODI match at Indore on January 24.