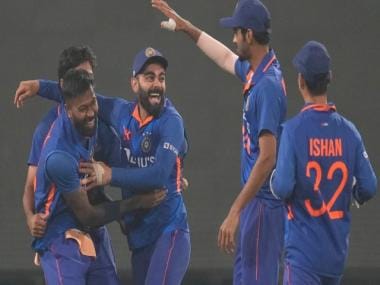 India won another bilateral series Beat New Zealand 3-0 He also claimed in ODI Number one position in the ICC rankings For example. Michael Bracewell and Mitchell Santner gave a serious scare in the first match, but India dominated the second and third ODIs.

The kite that was flown in the World Cup against Sri Lanka seems to be flying well now. This is what former England captain Michael Vaughan said, who is known to criticize the Indian team India is the favorite to win the World Cup.

Even though the World Cup is months away in October, ODIs have gained significance since the beginning of the year. And India, for now, has established itself as a force to reckon with. More so since the World Cup will be played in their own backyard. And India strengthened their position with significant gains from the series.

Shubman Gill has established himself as the first-choice opener in ODIs and when there was debate about Ishan Kishan scoring a double century, Gill shut down the debate. A great double ton in the first ODI.

Gill also won the Man of the Series award and equaled the record for highest runs in a three-match bilateral ODI series.

Meanwhile, Gill’s partner and India captain Rohit Sharma ended his century drought with a shower of boundaries in the third ODI.

He also scored well in the first two ODIs and was the second highest run-getter for India and third overall in the series.

Spinners are ruling the middle overs

The Indian spinners were tactical and managed to dominate the middle overs for most of the series. Kuldeep Yadav was the leader of the pack who also finished as the joint-highest wicket-taker in the series with six scalps.

Yuzvendra Chahal only played the last match but showed good rhythm and got two wickets, which could have been more if Ishan Kishan kept the stumping opportunities.

However, the spinners were not the most effective in the first ODI in Raipur and could have lost the plot in the same scenario.

Rohit also needs to decide which combination in particular he wants to go with Ravindra Jadeja And Akshar Patel will return to the setup.

India’s biggest improvement in recent ODIs has been their fast bowling which has flourished in Jasprit Bumrah’s absence.

Mohammad Siraj came forward to lead from the front, Mohammad Shami showed what he brings in the second ODI and also won the man of the match award.

Hardik Pandya has also started to become much more reliable with the ball and has also taken the new ball in the absence of Siraj and Shami in the final ODI.

India’s dominance in the third ODI in the absence of two frontline seamers speaks volumes about their bowling depth. And Bumrah may yet join the team which will turn the pace department into a formidable bowling attack.

While there were plenty of positives, the think tank would also like to work on a few areas of concern.

While Shubman Gill and Rohit Sharma managed to score all the runs throughout the series, the make-shift middle order failed to make a mark in the absence of KL Rahul and Shreyas Iyer.

In the picture: Men in Blue completed the ODI series sweep

Hardik Pandya was the best of the lot and proved his reputation with a well-paced fifty in the third ODI. But even he didn’t get going in the first two games and the team will want him to be more consistent.

Is death bowling still a concern?

The Indian bowlers were very good in the beginning and middle of the series and did not allow the Kiwi batsmen to play freely at the death except in the first ODI.

Having pushed India to the wall in the first match, they somehow managed to survive Michael Bracewell’s onslaught with some decent overs from the pacers. But not before they get hurt a lot.

On Indian tracks that are mostly heavenly for batting, leaking runs at the death can cost a World Cup fortune.