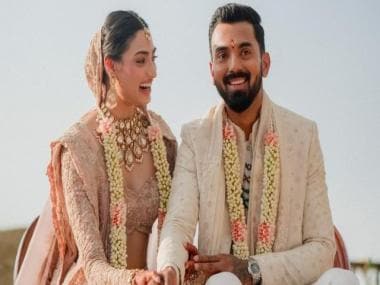 Star couple Athiya Shetty and KL Rahul were dating each other for quite some time during which rumors of their marriage were doing rounds on the internet. The couple after creating a lot of buzz about their marriage Finally tied the knot Monday, 23 January 2023 at Athiya’s father, actor Sunil Shetty’s Khandala farmhouse. Notably, the family kept the ceremony intimate in the presence of close friends and family members. Neither Sunil Shetty nor Athiya or KL Rahul have confirmed the marriage news till now and remain silent on the same.

‘Wishing them much happiness’: Virat Kohli and the cricket community congratulated KL Rahul and Athiya Shetty

Speaking of which, from their wedding preparations to the last day, several pictures and videos have surfaced online, making fans even more excited. Athiya and KL Rahul also shared the first official pictures of their dreamy wedding on their respective social media handles. There is no doubt that the couple looks stunning in their royal ensembles.

Let’s have a look at some of their wedding pictures-

In this first set of photos, the couple added a heartwarming caption that read, “In your light, how I learn to love… Today, with our dearest, we are married in the home that has given us so much joy and solace. Hearts full of gratitude and love.” We seek your blessings on this journey of unity.” Dressed in delicate pink and white dresses, the couple looked adorable.

After tying the knot, the couple drove out of the farmhouse in a golf cart and happily posed for the media who stayed outside all day to catch a glimpse of the newly-married couple.

Dressed in a traditional kurta and dhoti set, Sunil Shetty poses for the media with his son Ahaan after the wedding. The duo also distributed sweets to the media while confirming the news.

Congratulatory messages are pouring in from colleagues, friends and thousands of fans as the newly-married couple embarks on a new journey in their lives.

On the work front, KL Rahul was given a break from the New Zealand limited overs series due to marriage. The Indian wicketkeeper-batsman is all set to return to national duty during the Border-Gavaskar Trophy, which includes four Test matches against Australia. The series will start on February 9 in Nagpur.

Athiya Shetty was last seen in 2019 film Motichur Chaknachur. She made her Bollywood debut in 2015 with Hero opposite Suraj Pancholi. She also acted in Mubarakan with Arjun Kapoor.