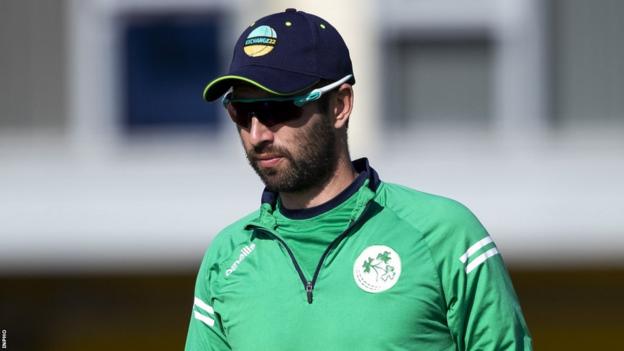 Captain Andrew Balbirnie will miss the rest of Ireland’s ODI series against Zimbabwe after retiring with an injury. Opening defeat on Wednesday with a suspected injury.

Balbirnie scored his eighth ODI century before being hit on the helmet by a deflection of his own bat.

The 32-year-old Dubliner has been replaced by uncapped batsman Murray Cummins.

The second ODI will be played in Harare on Saturday (07:15 GMT).

“Andrew Balbirnie suffered a suspected mild concussive episode after being hit on the helmet while batting against Zimbabwe yesterday,” Cricket Ireland head of physiotherapy and medical services Mark Rousa said.

“He was injured in the retirement and did not pitch in the second inning per the concussion protocol.

“He was re-evaluated this morning, but as a precaution it has been decided to withdraw him from the remaining two matches of this series.”

As a result, Munster Reds’ Cummins received his first senior squad call-up and will travel to Harare on Thursday from South Africa, where he is currently playing cricket.

National selector Andrew White said: “Murray is a talented top-order batsman who we see as a direct replacement – we know he has the stroke play, technique and mentality to score big and being left-handed will add a new dimension to the top order.

“Given the scale of cricket, it’s also an opportunity to give Murray exposure on the international stage.”

Clive Madande hit a last-ball four to give Zimbabwe a dramatic three-wicket win in the DLS format in Wednesday’s opener after beating Ireland 2-1 in the Twenty20 series.