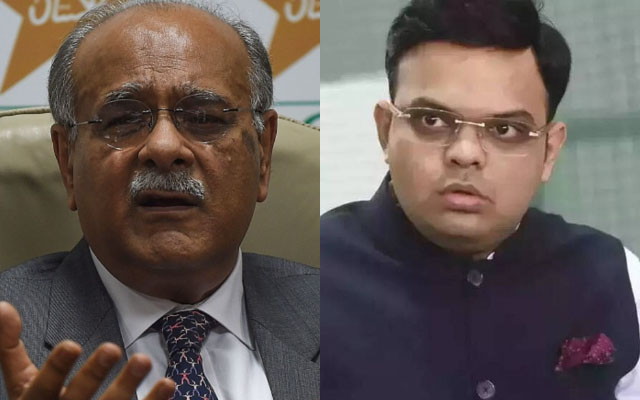 The Asian Cricket Council (ACC) will hold a meeting in Bahrain on February 4 to decide the future of the upcoming Asia Cup. In the meeting, two powerhouses of cricket, India And Pakistan will finally face off after Jai Shah’s controversial statement, where he announced that the Men in Blue would not play the marquee tournament, unless the venue of the competition was changed.

In return, former PCB chairman, Ramiz Raja threatened that the Babar Azam-led side would boycott the ODI World Cup if India refused to travel to Pakistan for the continental cup. Nothing changed when Najam Shetty took over as he took multiple digs at BCCI Secretary and ACC President Jai Shah during his tenure.

Recently, when the 34-year-old announced the schedule of the council, Najam Shetty made a controversial comment, in which he pointed out that the governing body did not consult the organizers before finalizing the date of the upcoming Asia Cup. He sarcastically even mentioned that Jai Shah should also announce the Pakistan Super League schedule which is finally going to start in February.

“Thanks to @JayShah for unilaterally presenting the @ACCMedia1 structure and calendar 2023-24, especially in relation to Asia Cup 2023 for which Pakistan is hosting the event. While you are at it, you can present our PSL 2023 structure and calendar! A quick response would be appreciated (sic),” Shetty tweeted.

However, the ACC rejected the PCB chairman’s comments and replied that the schedule was approved by its development committee and finance and marketing committee and was not Jai Shah’s decision.

“It has come to our knowledge that PCB Chairman Mr. Najam Shetty has made a comment to the ACC President about unilaterally deciding to finalize the calendar and announcing it. ACC wishes to clarify that it has followed well established and due process. The calendar was approved by its Development Committee and Finance and Marketing Committee in its meeting held on December 13, 2022,” ACC said.

The calendar was then communicated to all participating members individually including the Pakistan Cricket Board (PCB) through an email dated December 22, 2022. Although feedback was received from certain member boards, no comments or suggested changes were received from the PCB. In view of the above, Mr. Shetty’s comments on a social media platform are baseless and have been strongly denied by ACC, “ACC supports Shah’s stand,” they further elaborated.

Thus, when these three parties finally meet, it’s going to be a whirlwind affair, to say the least.